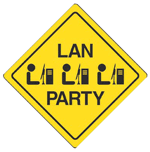 The CS LAN party which is more like an all-round games night is tentatively scheduled for January 20th. Last time, there were even more games than before, with poker players, lots and lots of foosball, Xbox, Risk, Lan games and general silliness.

Expect there to be satisfying nourishment (for a very reasonable price) and a break at just the point in the term where you begin to want for it to be over. As always, you can view photos of the past games nights in our gallery on the top right of the page (editor’s note: now lost). You snooze, you lose!

UPDATE: This round we’ll be showing the movie Primer. “Four friends/fledgling entrepreneurs, knowing that there’s something bigger and more innovative than the different error-checking devices they’ve built, wrestle over their new invention.” We’ll also have an xbox 360 and xbox for flashy gaming and 8-player support. But we won’t be doing a computer LAN this round to make things simpler. Still, maybe some next generation gaming on the projectors in DEMP 110 will tickle you the right way. We have lots of pop & chips. Plus, we’ll do a group pizza order as usual.

Add to Google Calendar Add to other calendar apps